week 4 - making a game my mum can play

So I had a break for a couple of weeks! Woo hoo! It was very nice, I watched lots of project runway. During my break I had a long hard think about what was going on with my game and what my playtests were telling me, and I came to the realisation that pigeon game is too hard to play! Not only that, but because the controls and UI are so funky (and to be honest, not really had much thought put into them), players are missing out on understanding pretty key parts of the interactions. So! My job for this week was to design for better ~ UI flow ~, and make the game less complicated (and by default, more accessible to people who have no clue how to play a videogame). I had a long think about how the interactions are put together in my game, and wrote up a list of possible changes I could make to make the whole experience feel a little more natural (I'm over telling people how to play the game!). 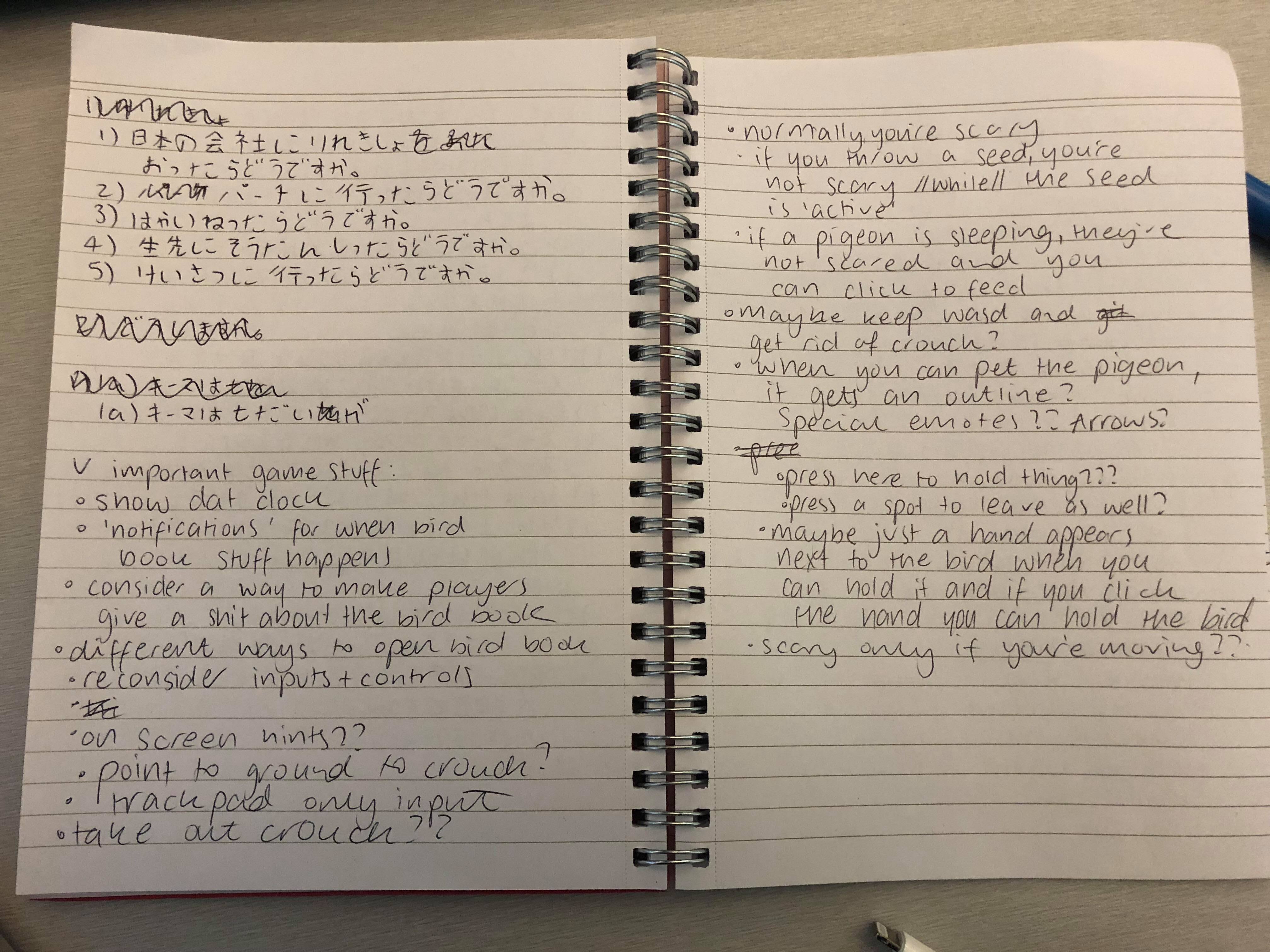 Here's my list (plus a bit of Japanese practice, sorry I couldn't be bothered cropping the image). As you can see, it's pretty vague but it was helpful for me to brainstorm and recognise key things I could change about player pigeon interactions.
The things I've decided I need to change are:
- Get rid of pigeons being scared of the player if they're standing, and replace with pigeons being scared if you move
- Keep crouch in the game, but only have it as an optional extra, and not a necessity to pet the pigeons (to cut back on confusing mechanics)
- Replace WASD to move hands with moving the trackpad (or mouse) to move the hands instead
- Replace 'h to hold, l to leave' when holding with a simple on screen UI element players click
- Have more on screen notifications to let players know when something happens / how to use the bird book (to encourage that interaction)
- Make the hand that appears when you can pet pigeons MUCH more obvious
- Pigeons cannot run when they're sleeping

Through playtests I also realised that players weren't really using the bird book (I kinda mentioned that above). To help encourage players to use it, not only did I plan to incorporate on screen notifications or prompts about the bird book, I also decided to bite the bullet and actually properly design what it would look like! I actually did this first, because I'd been putting it off for weeks and I wanted to get it D O N E. I wanted the book to feel personal, just like the rest of the game, and to feel sketched. I tried to mock up a page or two in GIMP, but everything was looking so digital, which I didn't dig. So, I decided to just draw up a scene on a //real// piece of paper and scan it into the game! I drew up a few different park scenes, leaving space for me to stick down printed images of trees and other parky things. I wanted the main book page to kinda reflect the in game environment (stock photos of pixelated trees), so I wanted to physically cut and paste tree pics on the main pages. This was the overall end result, which I really like! I think it's personal, a little quirky, and still feels relevant to the rest of the environment in the game <3 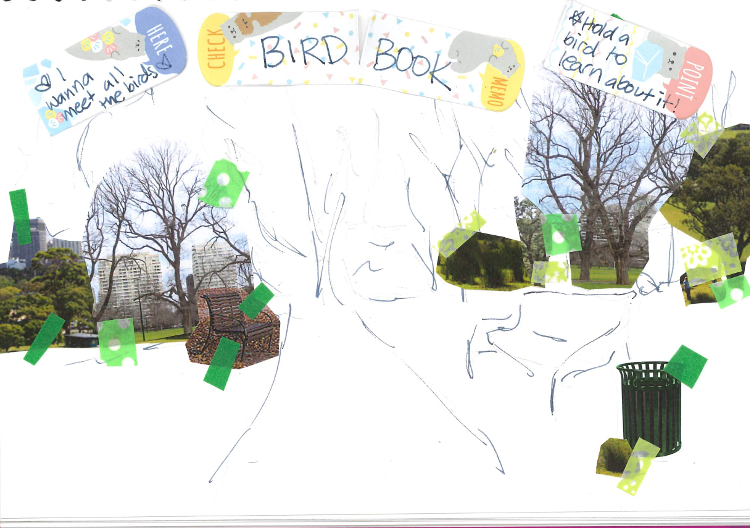 I could probably afford to have a sticky note telling players to click the bird icons (they're on the page in game), but maybe that's overkill...
The other pages were based off the layout of the online pokedex (https://www.pokemon.com/us/pokedex/), in a pretty similar style to the main page. Because everything is hand written I sometimes get a little worried it's hard to read, but I really like the vibe and I think the pros outweigh the conns in this case. Here's the page for the grey pigeon (spoiler alert!!!!!) :-) 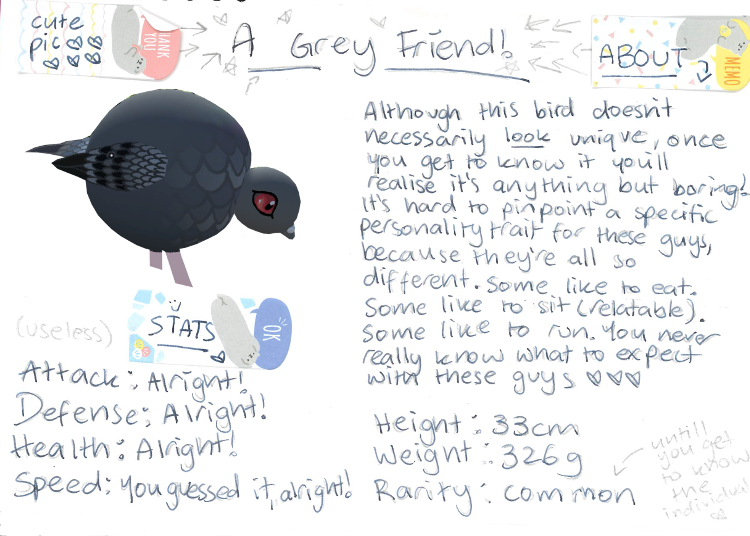 ^^ side note - it was extremely fun going shopping to find cute stickers and tape for the book. thnkz daiso and officeworks <3333

After I was done with this, I also really wanted to focus on encouraging players to actually use the bird book. So, I drew up a little sticky note that shows a little reminder for 5 seconds when the player unlock a new bird in the bird book. Here it is!

After looking at this GIF again, I think I could probably afford to make it a little bigger, but that's an easy fix! I also added a really similar sticky note to the start of the game, to really emphasise to players //how// to use the bird book. I know it says it on the icon, but it still seems to confuse people so. Also side note, ye I'm definitely changing the bird book icon some time in the near future!! Anyway, here's the little bird book how to icon :~)

As you can see, this one is a little bigger which I like :-) It just shows up for the first 10 seconds of the game, but I'll do some playtesting to check if that's //actually// a good length of time!

After that I decided I should change gameplay up a bit, and make it so that birds are only scared of the player when they move, as opposed to always being scared of players when standing up. I explained my reasoning behind this a little bit up above, but basically lots of my playtesters got super confused by all the step you needed to go through to hold the birds - this is an attempt at making it a little more ~simplistic~. Birds also can't run if they're sleeping, again to try and cut back any factors that can make gameplay confusing :-)

The last thing I did was I made little icons for the players to click if they want to start (or stop) holding pigeons. Having the players toggle between random keys to play the game proved pretty confusing, and although I didn't really //want// to put clickable buttons in my game, it seems like a good solution for now. Here they are!

So that's it for this week! Next week I really want to get a start on getting different kinds of birds in there, like the big fluffy one (that I half started already) and maybe the posh one (I'm thinking I want the posh one to look kinda like tranquill https://www.pokemon.com/us/pokedex/tranquill ). I'm also planning to keep working through that list of accessibility changes. The two main points I wanna focus on in this category are making the hand to pet the birds much more obvious, and having the holding hands move dependant on mouse position and now WASD.

That's it for this week, thanks for reading!