Week 2 of the devlog! This week has a been a weird week for me - I quit my job!!! So, I've kinda been focusing on other things and to be honest with you, I haven't really done as much work on my game as I would have liked to. It's not the end of the world, and don't get me wrong, I've done work and everything, but just a head up, there's not as much there as I probably would have liked :-)

This week has been focused on the ~bird book~. I've got a mechanic where when you hold a bird, you unlock info about it in a bird book, pokedex kinda thing, so you can learn about the new friend you just made. My job this week was to figure out  what it would look like!! The way it's gonna work is pretty simple - there's a little book in the corner, and when you click it you can see a page in a book with all the birds you've held (or haven't held yet). If you click on the picture of a bird you've held, the book will flip open to a different page, showing some special info on that bird, and maybe a picture of the first time you held it. I'd also really like to put in some useless stats, like a pokedex kinda thing, just because I think it'd be funny. I hope that made sense?

The first thing I had to do was decide what I wanted the bird book to actually look like. I'm not really an artist, so I lean pretty heavily on inspiration when coming up with stuff like this. Someone suggested that I look at real bird books, so that seemed like a pretty good place to start - the layout of bird books is really nice! 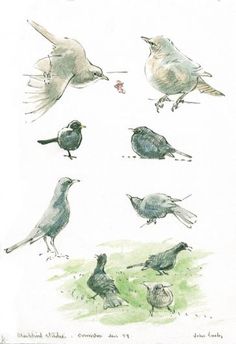 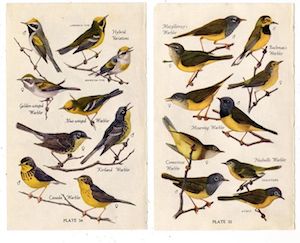 The one on the left by John Busby for Looking at Birds; an Antidote to Field Guides is great I think - the sketches are so lovely and the birds have a good roundness to them. I also loved the right one, by Richard H. Pough (Audubon Land Bird Guide, copyright by Doubleday & Company, Inc., Garden City), because of the layout! I love the idea of setting the birds up in their natural environment , and this right image inspired me a fair bit in my quick mock up's of what the book should look like. 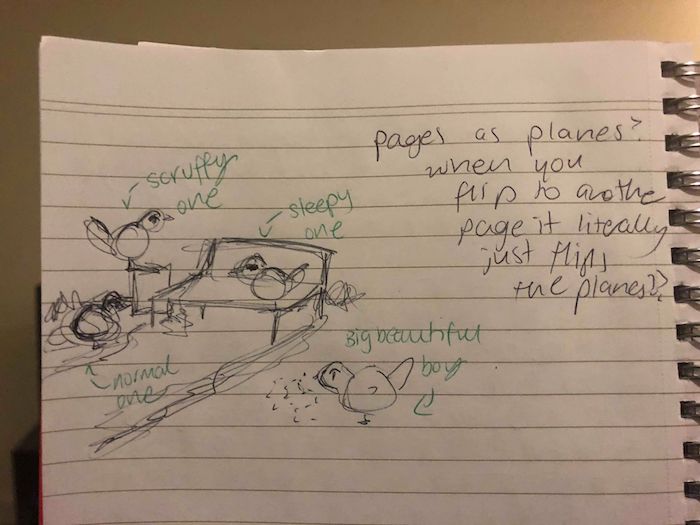 I did a few mock up's of what I wanted the main page to look like, but this is the one that really stuck. I want the different pigeons to all look different depending on a personality trait - for example, the scruffy pigeon likes to hang out around the trash. I thought this was a really cute way of not only showing the different pigeons in their habitat, it would also be a good way to hint to players where they might actually find some of these birds! Even more, I plan on having the different kinds of pigeons appear throughout the day at different times, so having the layout like this is also a good way to hint to players when certain pigeons might appear. Eg. The bird sleeping on the chair is definitely a night bird and hates mornings.
When I play games, I love to try and guess the personality of the different characters. When the game writes or designs these characters to account for those personalities, I find it super compelling!! The pigeon personality and getting players to really consider how each bird acts has been a pretty important thing for me when thinking about not only the bird book, but nearly all interactions the players have with the pigeons. I think maybe I'm getting a little off topic, but anyway you get the point - bird personalities are important :-)

You can also see in the corner of the picture a little scribble of an idea about how the book UI would actually work. I think I'm going to actually make a book, just out of planes with sprites on them (being the pages). When you open up the book (by pressing a button), it just loads in or enables the gameobject. When you want to read a description about a bird, the game literally turns the 'pages' of the book to the right one with the bird description. Having the bird book look and act like a real book is pretty important to me (it's charming!!), and this seems like a relatively straightforward way to do it without having to worry about complicated animations :-o 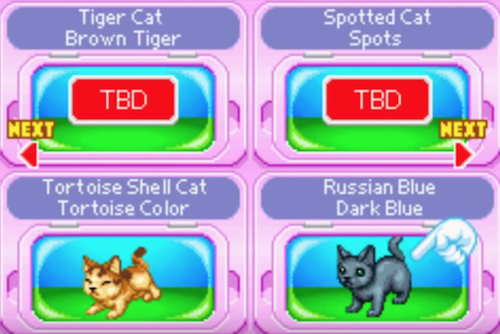 Catz gba is literally the best pet game ever trust me

I really like the idea of having the birds just be a silhouette in the scene, and when you unlock them (by holding them), you get to see the full image of the bird. Catz on the Gameboy Advance was actually a pretty good inspiration for this, I like the way you can see a snippet of the cats to buy later in the game, but can't see too much. It adds a pretty good 'suspense' to the game and really keeps you playing. What the bloody heck does a brown tiger cat look like? I gotta know!!! Side note, if you're into pet games and also into grinding for specific personality traits, you should play Catz on the gba!!!! 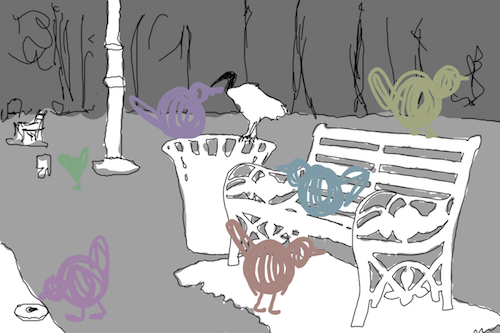 Anyway, that's where I got lots of the inspiration for the book look. Here's a real quick sketch I made of maybe what I want the scene to look like. This week I didn't want to finalise the page layout, I just really wanted to get an idea of what I wanted to do, and mock up something I could put quickly into the game. The coloured birds are just where I'm gonna put actual silhouettes of the birds - instead of drawing all birds into the background image, I'm gonna add the silhouettes and bird pics in as sprites once I get the book in the game, as I think it's gonna save me some work and make things a little simpler.

So that's it! There wasn't much technical work this week - mostly just conceptualising :-) If you're interested in the more technical stuff, I think there should be much more of that next week, as I'm planning on actually getting the book in the game and working. Thanks for reading!!